Boy oh boy, the month of May just flew past!

Between my writing break, beach vacation and critique partner’s visit, it was chock full of fun things right along with the work stress, the submission anxiety, and that Texas HEAT! 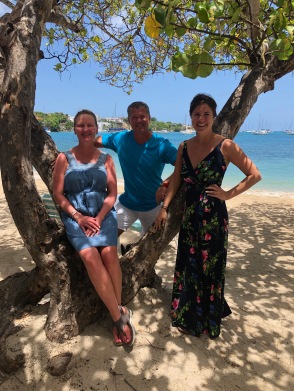 But I had some extra time on my hands, so I did get to read some PHENOMENAL books, so let’s get to it.

Enchantée by Gita Trelease ★★★★★
This was one of my most anticipated new releases of the year, and it did not disappoint! We follow Camille – a young woman struggling with poverty in Paris – who is desperate enough to master her mother’s mysterious magic and integrate into the French Court in an effort to save her family. Not only did it cover one of the most fascinating historical events (The French Revolution) with glitter and accuracy, it explored the bond of sisterhood with touching emotion and the addition of fantastical elements drew me in immediately.

The writing style was evocative and atmospheric without slowing down the pace. Each character was well-developed, and the setting made me feel like I was back on the streets of Paris or standing in the gardens of Versaille. I loved the magical dress and the glamoires – an unique magical system – and the romance was swoonworthy. Definitely a read to remember, and I can’t wait for the sequel!

The Devouring Gray by Christine Lynn Herman ★★★★☆
I am absolutely loving all of the trend of more contemporary fantasies, and Herman’s debut fits right in! We start with four families with mysterious powers to protect a super spooky town with even spookier woods in rural New York. When bodies start appearing, it’s up to teenagers from each family to save the day.

The prose was just lyrical and gorgeous, the scenes were vivid, and I fell in love with each messy, diverse and haunted character. I did want a bit more connection from them – especially Isaac who was easily my favorite but didn’t have a POV of his own. I also expected a little more darkness from the storyline (even though it definitely has some) but hopefully more of that to come in the second book, which I will definitely pick up!

Moonlight and Whiskey by Tricia Lynne ★★★★☆
I’ve made it a personal mission to read as many books with a New Orleans setting as I can, so this was an immediate add to the list. Successful businesswoman, smart-mouthed and curvy, Avery finally cuts loose on a girls’ trip to the Crescent City. Enter Declan – the sexy but flawed rocker who pursues her.

I really loved the characters in this romance. I loved that Avery’s inner monologue balanced between wonderfully confident but still with some insecurities. It’s so realistic for all women, and I related to that. Declan was equally well-rounded, and the push and pull between them was beautifully done with tension on every page. A couple of the sex scenes were a tiny bit too dirty for me, and sometimes I found myself wishing for less of them and a little more plot. But overall, it was a fun, sexy read!

Finale by Stephanie Garber ★★★★★
Not only has this proved to be one of my all-time favorite series, the author has become a personal favorite of mine through the lessons she shares in her stories. In this stunning conclusion, Scarlett and Tella have to find their true selves, their true loves and their true endings in the face of so many games coming to an end.

Everything about this story has been unique and imaginative – from the game of Caraval, the magical system and the Fates. I adored each and every character and consistently found myself immersed in the world, using all five senses to experience it. Garber set out to write a novel that felt like Baz Luhrmann movie meets a Florence + the Machine song, and she succeeded.

One of the things I loved most was the structure. The book is divided into parts. We get an “almost-ending” and a “true ending.” These two sections and the quote at the beginning were so powerful to me, and it drove home the overall message in this novel. So please add this one to your list. You won’t regret it. 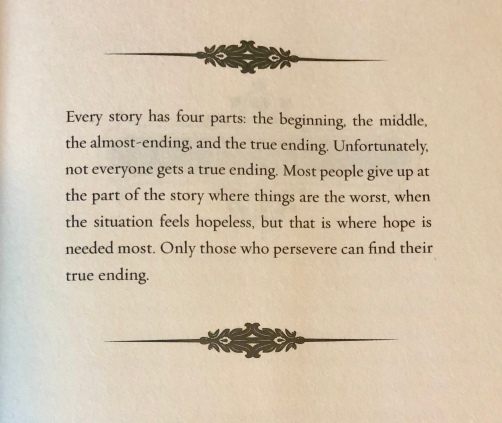 The Bride Test by Helen Hoang ★★★★☆
In the story of Khai – an autistic man who doesn’t believe he is capable of love – Hoang once again nails representation of those on the spectrum. I mean, wow. She has found her niche and rocks it. She also does a great job of showing the cross-cultural differences with Esme – a Vietnamese woman who is brought over by Khai’s mother to be his wife.

The immediate physical connection balanced with the played throughout the novel and created delicious “will they/won’t they” tension and chemistry. I adored Khai. His internal dialogue was hilarious, and his journey touching. Watching him work so hard was inspiring. The scene where he seeks sex advice from his relatives was one of my all time favorite. I did have a harder time connecting with Esme. I really disliked how she lied about her daughter, but I finally fall in love with her late in the book when she took her fate into her own hands. Because of that, I liked Hoang’s first book better, but it was still another great read from this author!

The Cheerleaders by Kara Thomas ★★★★★
“There are no more cheerleaders in the town of Sunnybrook.” I mean, that tagline alone would’ve sold the book for me. Five years ago, five cheerleaders died within weeks of each other. Now, one of their sisters is learning that it might not be over.

This thriller was compulsively readable and fresh, full of well-executed red herrings, strong characters, and constant twists and turns. It’s not often when I can say I was surprised by an ending, but I was with this one. The author also handled several controversial and touchy topics with poise and grace. It was my first book of hers to read, but I will definitely be going back for more.

The Editor by Steven Rowley ★★☆☆☆
This was a must-buy for me as soon as I saw it was about an author who sells his first book to none other than editor Jacqueline Kennedy Onassis: two of my favorite things rolled into one! And it started with a bang. Not only did it nail the historical and factual details, we got such an incredible insight into the world of writing and the world of the famous Jackie O. The first half had me enthralled… But about halfway through, it lost its magic and became just another family drama. I kept reading in the hopes that it would pick up again, but alas, it did not.

In Her Bones by Kate Moretti ★★★☆☆
I adore books about serial killers, but I especially love ones about the family members or victims of serial killers. I got both in this story of Edie, daughter of the famed Lilith Wade who murdered six women fifteen years ago. The concept of this story was instantly intriguing to me. Edie is obsessed with the family members of her mother’s victims, and when one turns up dead, she is the prime suspect.

But the execution underwhelmed me a bit in that I wanted more ambiguity on whether Edie was indeed innocent or becoming like her mother. I missed some of the tension that I usually love from thrillers. That being said, the characters had a lot of depth, and all the details of the investigation were very well-done. Not my favorite, but I enjoyed the read overall.

I wrote absolutely nothing this month. Literally nothing. And it was glorious. Taking a break is so crucial to every writer’s sanity and creativity as well as their craft. After some time off to refill my creative well, I can come back to The Blood Between Us with fresh eyes and accomplish what needs to happen with the next revision.

Feedback from beta readers has been trickling in, and I am thrilled that the vast majority of it is very positive. And I’m even more excited that they were able to identify issues I wasn’t and give great advice on issues I knew were there but didn’t know how to address. I’ve been very lucky to have found some amazing beta readers, and I can’t wait to dive into their feedback this month and make this book even better.

Like I said above, I am hoping to dive into revisions for The Blood Between Us this month, but that is pending on when I receive the remainder of my beta and coach feedback. Hopefully soon because I am JONESING to get back to the story. Maybe I will spend a little time scoping out the sequel while I wait…

I will definitely be diving headfirst back into blogging after a few pretty stagnant months. I apologize for the lack of content – life just keeps getting in the way – but I am really excited about the posts I have planned.

As far as reading goes, I have two wonderful beta reading projects waiting in my inbox and am excited to get to more on my unending TBR list:

What are your summer plans? Share in the comments!