Happy 2017 everyone! I hope you all had a wonderful holiday season full of food, family and fun. Are you ready to be back in the real world? Nope, neither am I.

Between the holidays and some major revision work, December was a light reading month. But I did get to experience the magic of the year 2118, peek into life on a Christmas tree farm, and learn a new algorithm to improve your story

The Thousandth Floor by Katherine McGee ★★★★☆
NEW YORK CITY AS YOU’VE NEVER SEEN IT BEFORE. WELCOME TO MANHATTAN, 2118.
What a great tagline. Set in a tower with – you guessed it – one thousand floors, McGee’s debut novel follows around a group of teenagers. Think Gossip Girl but in the future. Fair warning: lots of drugs, a little bit of incest, and one particularly brutal murder. Not exactly the most literary of books, but I was drawn in by the strength of her characters and the glittering uniqueness of a future world. I was waiting for someone to jump out and say…

What Light by Jay Asher ★★☆☆☆
As you all know based on my review here, I was just a little obsessed Asher’s first novel, so I went into his second with extremely high hopes. I wanted to love it so badly, but I was disappointed. Thirteen Reasons Why was a beautiful, tragic testament to an issue that haunts all teenagers. What Light is a sweet and light Christmas story, not necessarily a bad thing but a major let down for me. I did love the setting of a Christmas tree farm, but the vanilla characters bored me. Maybe his third will be more up my alley.

The Story Solution by Eric Edson ★★★★★
I would say, I stick to fiction 98% percent of the time. But I am known to read the occasional nonfiction book, especially if it deals with writing. Edson’s book explains the twenty-three unique steps that every hero must take. It’s practically a formula for a great novel. I’d read it once before while at SMU, but it came in handy again while revising. 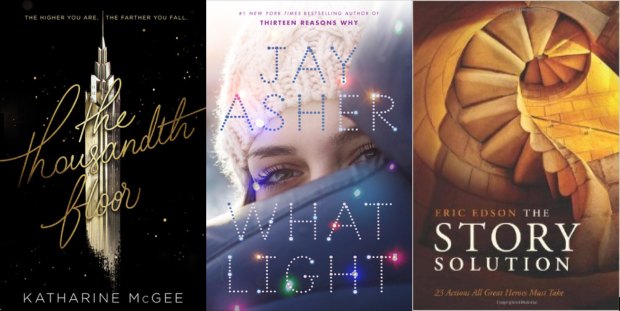 As you may remember from last month’s wrap up, I’ve got revision on the brain. For the first three weeks of December, I took red pen and multiple different colors of highlighter to a printed version of State of Grace and slowly edited my way through. Then the week between Christmas and New Year’s, I locked myself in my apartment and got to work.

I focused on increasing the stakes, speeding up the pace, and balancing the subplots with the overarching main plot.

And I am really proud of the finished product.

Coming up in January…

Soon I will be sending the new draft of State of Grace back to the four agents who requested revisions and will resume querying. Fingers crossed everyone!

As far as reading goes, I know I will need a pretty good list to keep me distracted. The first two are leftovers from last month’s list that I didn’t get to, and the last two were Christmas presents.

Let me know how you did on your holiday writing, and I wish you a fabulous start to the New Year!

One thought on “Monthly Recap: December 2016”