“What’s in a name? That which we call a rose
By any other name would smell as sweet.”
– William Shakespeare

Shakespeare may be right about people’s names… Or even roses. But when it comes to books? Not so much.

But in fact, it requires a careful formula of identifying a theme, inspiration and… even more inspiration.

Of all the pieces of State of Grace, the title was the hardest. (Besides the one-page synopsis. But we will talk about that another time.)

I refused to let myself pick a working title. In fact, I didn’t pick anything until I was forced to choose during the query process. It was too hard, and honestly, I was too afraid.

You see, most titles are changed at some point throughout the publishing process. Whether it is your agent, editor or publisher, it is more than likely that you first title will not be your last.

This is a problem for me. I get emotionally attached to things, and I knew the title – even just a working title – of my first novel would be the same.

But you can’t query a novel called Untitled, so I buckled down to do the unthinkable.

After several pages of brainstorming and a few crazy dreams, I approached the problem a little more methodically.

What were the major plot points of my novel? The character arc? The themes?

Grace. That word stuck with me. 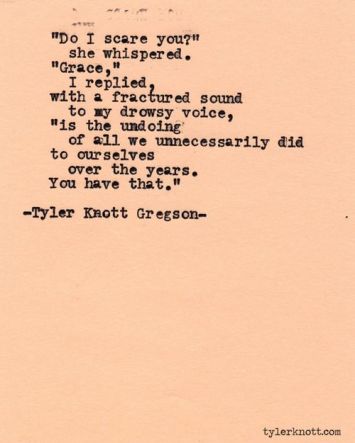 You see, I have five poems hanging above my bed, all by one particular poet: Tyler Knott Gregson. And one of said poems reads as following.

“Grace is the undoing of all we unnecessarily did to ourselves over the years.”

My main character, Dani, has experienced some truly horrifying things, but the wounds she has refused to let heal have impacted her the most.

She needs some grace.

And then in an act of pure coincidence – and in one of my many jam sessions – a song by my favorite artist, Taylor Swift, played through the speakers of my car.

Just listen to the lyrics:

And I realized in an instant that this is what Dani needed. To exist in a state of grace.

So my novel has its name. At least until someone makes me change it… 🙂