I had a revolutionary realization this week. It was big, guys. And it had to do with the debate that has been on everyone’s mind.

I’m talking about the existential crisis that pits fans against fans: Friends vs. How I Met Your Mother.

You see, I have one foot squarely planted in each camp, believing that both are the two most entertaining and well-written comedies in TV history. But while I was watching episode 7, season 3 of HIMYM, I had the aforementioned realization. 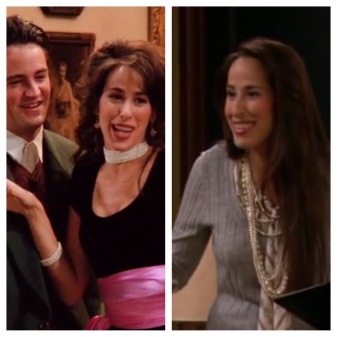 The realtor that sells Marshall & Lily their apartment is… JANICE! Mind. Blown.

And once I picked my jaw up off of the ground, I realized this is not the only hidden Easter Egg that links the two seemingly separate shows. I researched, I rewatched, I remembered.

I officially opened Pandora’s Box. Below are my findings.

Let’s get the obvious out of the way first. Yes, they are both based in NYC. Yes, they both have their respective hangouts: Central Perk & MacLaren’s Pub. Yes, they focus on a group of twenty-somethings finding their paths in life.

But things get weirder…

So what do you think? Coincidence? Plagiarism? A conspiracy between the shows’ creators? For me, I am not sure whether to be impressed or disturbed. I will let you decide for yourselves. Post your comments below.

Oh and in case anyone is wondering which character I most relate to, I am Rachel Green. And proud of it.

3 thoughts on “Friends vs. How I Met Your Mother: The existential question”