So I’ve officially started my second novel, and there’s nothing scarier than looking at a blank Word document and thinking to yourself, “How do I even start?”

Well, thanks to the lovely professors at SMU’s Writer’s Path, I have the answer…

When I was first introduced to Joseph Campbell, I was skeptical. Twelve steps for EVERY SINGLE STORY? No way. But then I started paying attention to different plot lines: Harry Potter, The Green Mile, Erin Brockovich, a random episode of Doctor Who (for those of you who haven’t seen “Blink,” I strongly recommend it).

So when it came to Dani and State of Grace, I wrote each of the twelve steps of Joseph Campbell’s Hero’s Journey  first. Then I filled in the blanks. And I plan on imitating the process for my second novels as well.

I thought I would detail that process for those of you who may want to learn – whether fellow writers or just interested.

And here’s a nifty little diagram: 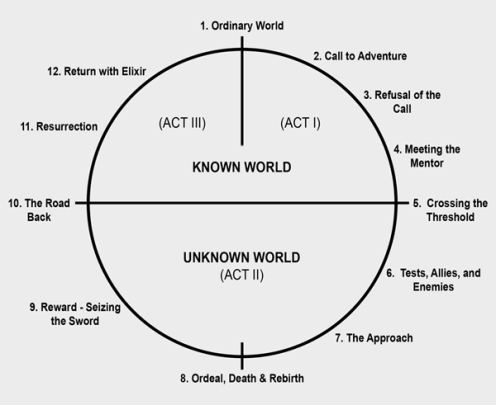 For those of you unfamiliar, I’ve outlined those exact steps below using one of my favorite stories… The Lion King (or the animated, animal-talking version of Hamlet).

Now everyone writes differently. There are lots of writers who just starting writing and wing it. There is absolutely nothing wrong with that; you just have to find what works for you. I just know if I approached it that way, I would never get a damn thing done.